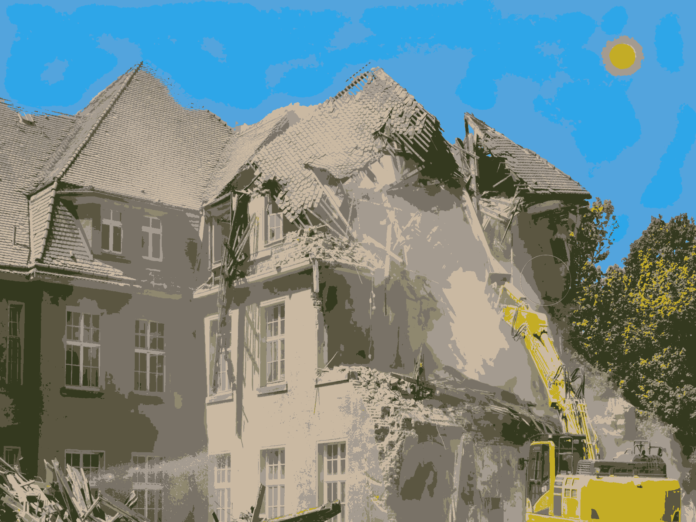 A house’s total demolition cost is based on several different factors, such as the size of the home and the number of add-ons. In the United States, the average price to demolish a house in 2021 was $9,000. Demolition costs vary from one state to another.

Factors that contributes to the cost of demolishing a house

How Much Does It Cost to Demolish a House? Many cost factors go into the price of destroying a house.

The size of the home

The size of the home being demolished will play a role in determining how much it costs to have a building removed. Smaller homes are often cheaper because they do not require as much time or equipment to remove them. However, this can vary based on other cost factors such as geographic location and whether or not any special permits are required for the demolition.

Whether or not permits are required will vary depending on local laws at the given location where the house is located; if there are none, no access will likely be needed to demolish a house. However, if permits are required in consideration, it can add to the demolition price; these permits often take about five business days to acquire before the demolition can begin.

How much machinery is needed to safely demolish the structure will influence its costs, especially if using heavy equipment like excavators and bulldozers (later on). Using less machinery means that more workforce will be needed to do the same job, meaning there would be higher labor costs to complete the job in the same amount of time. Geographic Location

The geographic location plays a large part in determining how much does it cost to demolish a house. Demolishing houses in highly populated areas with high demand for labor, such as congested city centers, is more expensive than on the outskirts of town.

The cost of cleaning and disposal varies on where the home is demolished; it can range from $100 to over $1,000 in some cases. Sometimes, special equipment and chemicals need to be rented to ensure that all hazardous materials are removed and disposed of before grading begins. Labor

It plays a massive part in how much it costs to demolish a house; usually, less machinery contributes to higher workforce costs. It’s important to consider whether the project will require excavation or grading work after demolition is finished. If so, this will significantly increase the labor cost because it means working more hours to complete the project safely and effectively.

Cost to thrash a house according to the types of demolitions:

As the housing and financial crisis persists, more and more Americans are choosing to demolish their homes and rebuild. Deciding between partial demolition and total demolition is the first step in tearing down a house.

A partial demolition involves taking down only certain parts of a building, such as removing just one wall or floor, which with most houses is the roof, according to Total Demo. As a result, this type of demolition reduces the number of debris by about 25%. If you have ever demolished anything in your life, you know that it takes time to remove each piece individually. So in most cases, partial demolition saves money in labor costs, but overall it will still cost more than total demolition.

The only time partial demolition is the more cost-effective option is when you plan on building a replica of your original house, or near enough to it that most people can’t tell the difference without looking at both sides by the side. If this is your intention, then there are still things you must take into consideration; you will still have to pay for materials and construction, which is often more costly than demolition. A new study by researchers at Johns Hopkins University found that partial demolition results in higher toxins in the soil and water around the house.

If you want to rid yourself of as much clutter as possible, then consider a total demolish. This type of demolition rips the entire house down in one day. It’s an efficient way to get rid of junk, but not always the most practical when wasting time and money. If you live in a city or town with strict zoning laws for disposing of construction debris, you might have to hire a truck and pay the landfill fees yourself. If your lot is large enough to fit all the removed parts of your house, then this cost will be negligible. However, if you plan on selling the lot or renting it out after building a new home, then disposal fees can be a deal-breaker.

Before you sign off on any demolition plans, it’s always best to get quotes from at least three companies so that you have an idea of how much you are looking at for each route. For example, if your house is in the center of town and many people walk by it daily, you will likely need to pay for barriers and security. Demolition companies charge by the hour, so making sure you have enough workforce is essential to staying on budget.

If your house is too much of an eyesore to be around your neighborhood, there are always dumpsters, skip bins, or roll-off containers that can hold all the debris from a real demo and make room for more trash. As you can see, both total and partial demolition come with their pros and cons. The important thing is to know precisely what you plan on doing with the lot once your house is no longer there because it will affect how much you pay in the end.

What is the cost of demolishing a property in the UK?

An 80 to 120-meter-square tiny detached house may be torn down for about £7,500 on average. The typical demolition price for a big detached house (200-250m2) is around £20,000. The debris disposal accounts for most of the overall cost of demolition since hauling, and demolition firms charge landfill fees.

A 1200 sq. ft. home would cost approximately how much to demolish?

When pricing demolition, what do you include?

Demolition costs usually depend on the square footage of a building homeowner living in that home should know the property’s complete condition and any homeowner issues, such as what to do with an infestation of bees or squirrels and whether there is mold. Determine how many square feet the structure has and multiply by a dollar amount in that range. The national average for commercial demolition is roughly $4.