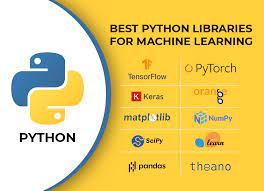 A couple of years ago, Python made its debut on the popular Top 10 Programming Languages List, and in the few years since it has quickly become one of the most popular programming languages for data scientists and machine learning specialists. But being that Python is such an easy-to-use language, many newcomers to machine learning find themselves wondering if it even qualifies as a real programming language. Well, our answer to that question would be yes – and this article will tell you why! Keep reading to find out about some of the best Python machine learning libraries out there!

Matplotlib is a 2D plotting library for the Python programming language and its numerical mathematics extension NumPy. It can be used in a variety of disciplines, including sciences such as physics and chemistry, data analysis such as stock market analysis, engineering, and visualization. Matplotlib can be integrated with other packages such as Seaborn or Bokeh for more advanced graphics.

NumPy is a foundational package for scientific computing with Python. It defines an N-dimensional array object, and provides efficient operations on these arrays such as calculating a dot product or finding the sum of two matrices. It also contains linear algebra, Fourier transforms, and random number generation functionality. NumPy is a fundamental tool for many other packages that rely on its functionality; for example, SciPy builds on NumPy by adding routines from statistics, linear algebra, and more recently machine learning.

Pandas is a library for data manipulation and analysis, written and maintained by Wes McKinney. It is one of the best-known and most widely used packages within the Python data ecosystem. Pandas focuses on data frames: containers of heterogeneous tabular data which provide labeled axes similar to tables in a spreadsheet. Labels may be integers, floating point numbers, strings, or boolean values.

Scikit-learn is one of the most popular and powerful open-source machine learning libraries for data science. It provides a set of tools for data mining and analysis. The library is written in Python and contains many supervised and unsupervised algorithms for classification, regression, clustering, dimensionality reduction, model selection and preprocessing.

Seaborn is a statistical data visualization library that runs on top of matplotlib. It provides a low-level interface for drawing plots, but it also has some higher-level features, like color scales and statistical tests. Seaborn is especially useful for exploratory analysis, where you want to produce many graphs quickly and don’t need them all to be perfect.

Keras is a high-level neural networks API, written in Python and capable of running on top of TensorFlow, CNTK, or Theano. It was developed with a focus on enabling fast experimentation. Being able to go from idea to result with the least possible delay is key when doing exploratory research.

TensorFlow is a free, open-source software library for data flow programming across a range of tasks. It provides high-level APIs for building deep neural networks, and runs on CPUs or GPUs. Developed by the Google Brain team within Google’s Machine Intelligence research organization for internal use, it was released as an open-source project in November 2015. Its popularity has grown significantly since then: TensorFlow ranked #1 as the most starred machine learning project on GitHub as of March 2017.

PyTorch is a relatively new deep learning framework for Python. It was released about two years ago, and it is quickly becoming one of the most popular frameworks for deep learning tasks. There are many reasons why PyTorch has been so successful, but what might be the most important reason is that it is the only major deep learning library that lets you use Python for both research and production.

CNTK is a free and open source platform for deep learning that provides an easy way to build neural networks. It integrates seamlessly with Microsoft Azure Machine Learning as well as with R, Python, MATLAB, and Julia. CNTK’s open architecture makes it compatible with other popular machine learning libraries such as TensorFlow. CNTK is sponsored by Microsoft and developed by the Computational Neuroscience Toolkit (CPNT) project at Carnegie Mellon University.