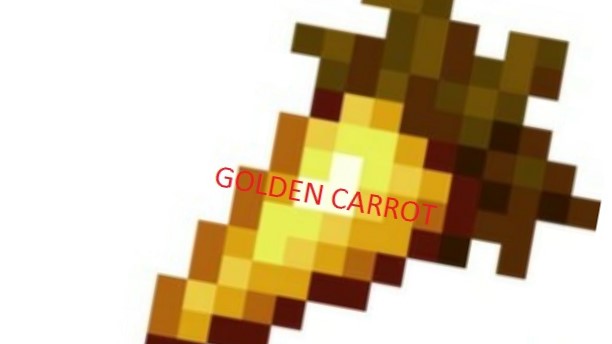 Various food items aid in the survival part of the game Minecraft, but some are truly unique. One is the Minecraft Golden Apple, and one is the Minecraft Golden Carrot, which is rare and difficult to come by item. Minecraft typically utilizes food items to restore health and enhance hunger saturation. They’re also used for breeding several of the game’s pets, creatures, and mobs, resulting in offspring. However, there are a few pretty unusual foods.

And are used for purposes other than these. One of them would be the Minecraft Golden Carrot, which we examine in detail. The Golden Carrot is a scarce food item that gives the second most excellent hunger saturation inside the game after Suspicious Stew and Dandelion or Blue Orchid.

Golden Carrots spawn in Bastion Remnants and Ruined Portals periodically within chests. Aside from that, players must craft it to obtain it. On the other hand, some master-level farmer villagers may be willing to trade 3 Golden Carrots for 3 Emeralds. This Minecraft guide includes screenshots and step-by-step directions for making a golden carrot. A golden carrot has been one of the various food items you may manufacture in Minecraft.

To create a Golden Carrot, you’ll need the following materials.

These are the components you’ll need to make a golden carrot in Minecraft:

In survival mode, how to make a golden carrot?

1. Go to the crafting menu and select “Crafting” from the drop-down

To begin, set up your craft table so you’ll have a 3×3 crafting grid.

A crafting area consisting of a 3×3 manufacturing grid should be visible in the crafting menu. Place eight gold nuggets & 1 carrot inside this 3×3 crafting grid to make a golden carrot.

The golden carrot should appear inside the box on the right once you’ve filled this crafting area with a suitable design.

3. Return the Golden Carrot to your inventory.

Golden Carrots are a fantastic food option that restores Six hunger points to players. With 14.4 points, it has the most saturation times during the game.

Uses of golden carrots in Minecraft

The Golden Carrot was utilized to make a Potion for Night Vision using a Brewing Stand. To manufacture a Potion of Night Vision, golden carrots are utilized in the brewing process. To prepare a Potion of Invisibility, add a Fermented Spider Eye. A golden carrot could be made at the crafting table by combining an ordinary carrot and eight gold nuggets. Gold nuggets can be obtained by converting gold inside the player crafting box. Three golden carrots can also be acquired from master-level farmer villagers for three emeralds. Golden Carrots can be planted in soul soil, but plants grow slowly and cannot be bone-mealed.

The crafting recipe would be a carrot surrounded with eight golden INGOTS (because the ordinary golden carrot requires nuggets), slightly more saturated than typical golden carrots. It would give a status effect similar to a golden apple if consumed. A golden carrot is a Brewing component used to create Potion of Night Mode. Creating the Potion of Invisibility is also necessary, which needs a Night Vision potion and a Fermented Spider Eye. The player is unable to consume a golden carrot.

Because carrots do not have seeds, they can be planted simply by placing the carrots in a Farmland block. Carrots grow similarly to wheat when planted. However, instead of eight stages of development, it only contains four. Using Bonemeal, a carrot could be transformed into a fully grown plant like other crops.

In Minecraft, how can you create a brewing stand?

A golden carrot can be obtained in two simple and extraordinarily challenging ways. Growing or stealing a standard carrot, then surrounding it in a crafting square with gold coins, is the simplest way to make it. Trading three emeralds for a beautiful golden carrot with Professional farmer villagers is also relatively simple.

What is the location of a golden carrot?

What’s the best way to make a potion maker?

Brewing station in Minecraft Fill 1-3 crystal water containers from a water source or a cauldron. Fill the bottom three holes with water bottles. Fill the top half of the container with the main ingredients. For the brewing process, use Blaze Powder. Rep these processes till you get the potion you want.